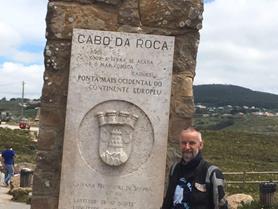 This morning Sigrid convinced Bjoern, who was totally enthusiastic, to start with sport.

Because of the traffic noise throughout the night, we decided that this was enough camping and looked for cheap accommodation in Lisbon.

We found an Airbnb place where we could move to today. Before that we had to let the receptionist at the campground know that we would come back and pick up anything that would be delivered via post in the coming days.

So we packed up and were off to our new place of residence,

Darn.. when we arrived we found that it was a steep street and parking the bikes could be a problem. At the bottom of the hill however there was a space which we promptly occupied with our bikes.

That meant we had to carry our luggage up the hill, then up the stars into our temporary room… The explanation from our host was that someone broke the bed in the other room and he would get it fixed today so we could have that room tomorrow. After that let down we tried to make the room as comfortable to us as possible. To its credit the room had a great view!

Unfortunately the bathrooms smelled as well.. They were clean but still smelled. We tried to air them out with very limited success. Eventually we closed the doors and let the fans run continuously.

One good thing came out of this, we got to meet Carlo from Italy, a fellow traveller who’s been travelling since 14 years. Amazing!
His details are below if you want to look him up

We exchanged stories and had a nice conversation.

He suggested a few places for us to visit while we are in Lisbon. So after settling in we went off to explore more of Lisbon.

Walking past some homeless people setting up tents under a bridge, then along a container harbour, we got to the old city in approx. 40 mins. We ended up at the ‘plaza de comercio’.

A band was playing on the river side and the plaza looked great. We made our way to the tourist office, but it was too full so we left and walked through the pedestrian strip instead.

At a street crossing we heard a loud bang. There was an accident with a scooter rider. Sigrid saw him flying through the air and was completely overwhelmed. Police and another scooter rider were there and assisted. The guy got up and was moving, and luckily someone had called the ambulance anyway…

This made it clear to us again – you can’t take anything for granted, especially when travelling on two wheels.

On a lighter note, a short while later we met Carlo on the way, he was on the way to meet someone special. We finished the excursion with some typical Portuguese dinner at a small shop.

The people at the restaurant were really nice, they explained everything to us about the people with red flags and shawls. Turns out a a soccer final was held today, but unfortunately their favourite lost…

Along a nicer way home we found a Lidl and stocked up on supplies for next morning’s breakfast.

This morning after breakfast we moved into our better room with a balcony. We used the day to catch up on blogs and reading

Since it was Monday we started with sport again and decided that today would be a diet day again too.

We attempted to organize a place for the chain and sprocket fitting. That worked, however, we were unsuccessful in trying to buy tires online, troubles with our Australian credit card as it was tagged for fraud suspicion… Grand!

Our next idea was to ride to the fitting place and try to convince the guy in the shop to buy the tyre for us. That didn’t work either, looks like we don’t look trustworthy enough, what a bummer! By chance we passed a Triumph shop and asked for help in there. The shop assistant couldn’t help us directly but he called a friend. With his help we got the tyre organised within a day, so we could rock up at another tyre shop on Wednesday and get the tyre fitted, bingo!

Now more site seeing was in order, so we went to the most western point of Europe, then along the coast off to the Belem tower.

The first part was great, but then the traffic jam started. Finally we arrived at the tower, took some pictures with us and the diddle

After some a coffee and a tee we went home and had our diet meal – lettuce, carrots and salmon, yum!