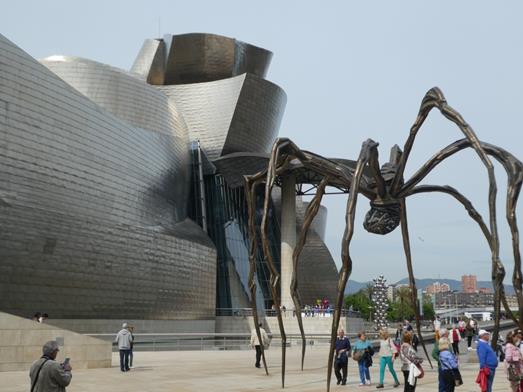 The temperature this morning was back into the single digits (9 degrees). During the day it got warmer and warmer. The ride to Bilbao was mostly on highways, but the highway in Spain was really enjoyable. There were nice curves and with the beginning of the Pyrenees, the landscape just looked awesome. When we arrived in Bilbao, we had 20 degrees…. summer after all!

We had booked an Airbnb and found it…. after some trials and tribulations.

After we settled in our accommodation, we decided to have a short stroll through the area close by. We found that there were fancy new buildings side by side to really old ones

In the pedestrian zone we found an old water fountain and, to our surprise, it was still functional!

The next day we went to the Guggenheim Museum. The building itself is very impressive, and I don’t think I can do justice on a picture.

Before entering the museum, there was plenty of art at the outside. I liked the huge spider, just in front.

At the balcony there were some colourful methal Tulips, which looked really nice.

It was fun to try to take pictures with the reflection of ourselves in it.

The balcony was surrounded by water, and every hour fog was generated all around.

I tried to capture the interior in some pictures, but that didn’t work out too well. It is hard to capture it, since there is no regularity in the shape or forms of the walls.

Anyway, there was an exhibition which had shaped huge pieces of iron into walkways, with the height and curves ever changing. It made me feel weird walking along these walls. The art was explained a bit later with a model, and on a model it was easier to understand what the artist was trying to achieve with it and why it felt so weird!

Anyway, most of the exhibitions were not my kettle of fish, but it is interesting to see with what type of ideas people can come up with.