Got up earlier, went to the lake to see bears, no success, but we saw a bald eagle on other side of the river. 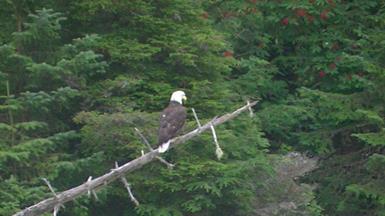 We went back, made breakfast, packed up and sat on the veranda where we had Wi-Fi and did some communicating with Australia. 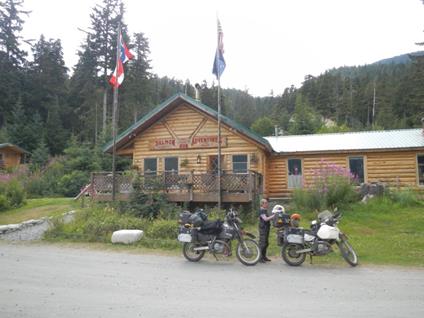 Around noon we went to town and had lunch before riding to the ferry. After we checked in we had plenty of time, so we thought we give the bear another chance to show up, still no success. But the river looked like the one from the John West advertisements , all the guys lined up and fishing for Salmon. 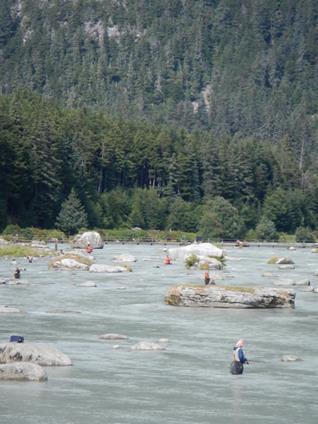 Later we went back to the ferry, hopped on, tied the bikes down and had a stunning four hour cruise. 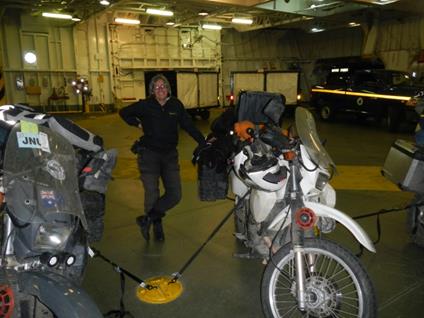 The glaciers were just passing in front of us, one bigger than the next. 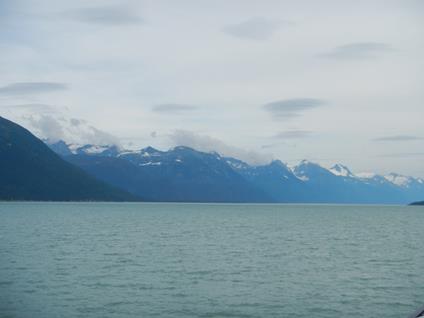 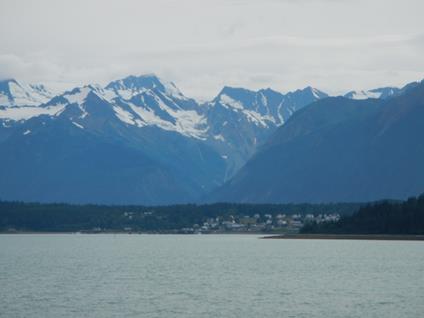 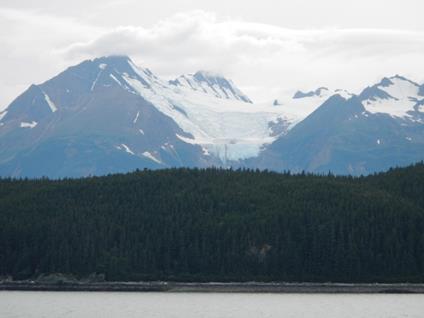 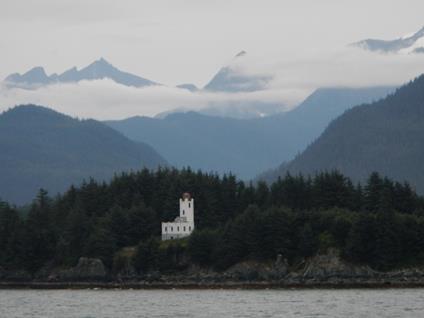 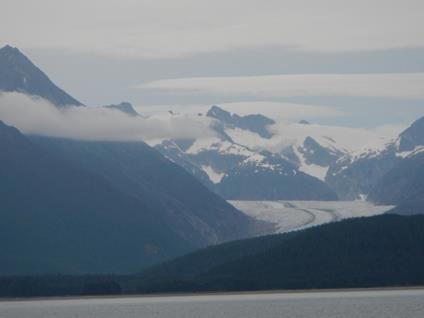 When we arrived in Juneau, we were intrigued by a large Glacier just behind the town which was something worthwhile exploring during our stay. 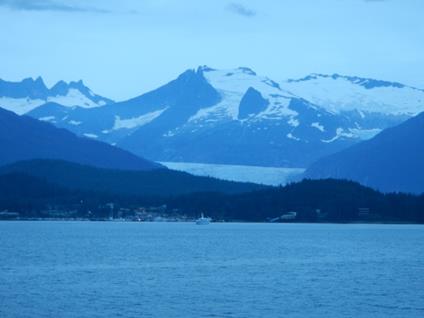 When we arrived in our hotel, it was around 22:00 and it started to get dark again. The hotel had some rustic charm and they tried to keep the interior as historic as possible. Well they changed the gas lights to electric lights, I think that might have been all 😛 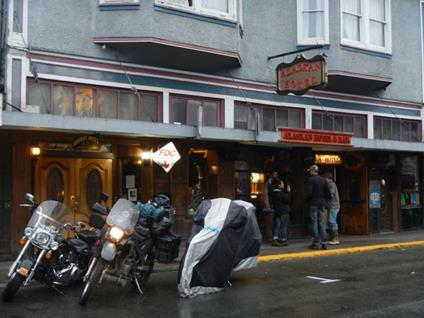 It was raining the whole day. In the afternoon, we decided to get our raingear out and walk around a bit. We went to the harbour where all cruise liner moored. It is hard to see the sheer size of these boats until you get a bit closer to one. 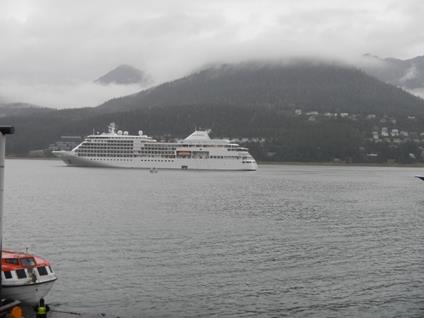 The Radiance of the Sea already looked quite impressive from the back, but from the side you could see that they even had lifts to bring passengers onto their deck. 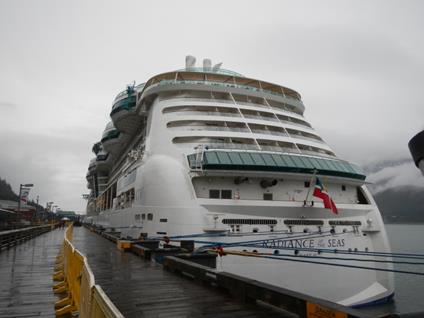 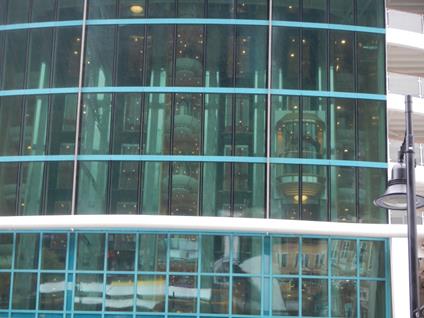 We went a bit further into the touristy area, where they had plenty of Jewlery stores. They were really empty, but looking at the size of these ships, I can imagine that all the shops are full if one or two of the cruize ships arrive. We found a large bear, so we took the mandetory pictures. 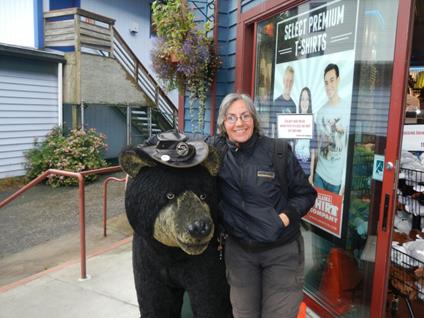 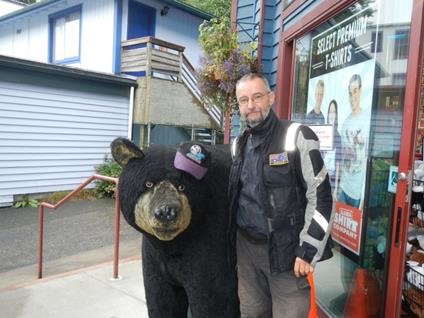 Since it was still raining, we decided to go to the pub and have dinner there. Here we realized that we would miss out on one of Juneaus main attraction, the Goldfish Race… Bummer 😉 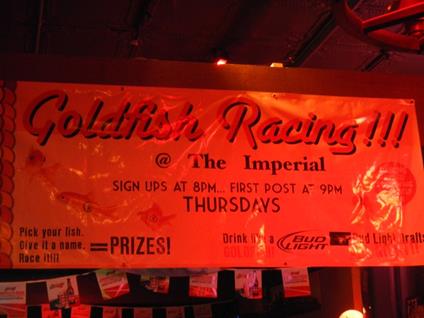 In the morning we looked out of the window and it was still raining, but looking at the weather forecast gave us hope, the rain should stop in the afternoon. So we took it easy, had a loooong breakfast and got ready around noon to visit the glacier. When we arrived at the glacier the rain stopped and the sun started to poke through the clouds. The view onto the glacier was stunning. 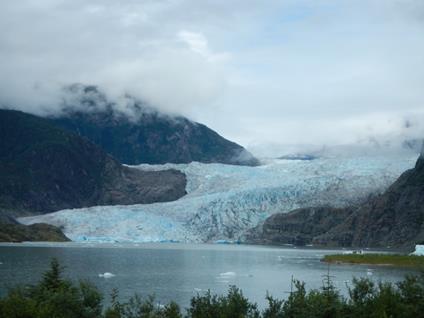 We walked around and found a board walk leading away from the Glacier, which made us curious. It was leading along a small lake to a tiny river and there were bears fishing for salmon. It was a mother with her two cubs, we were excited. 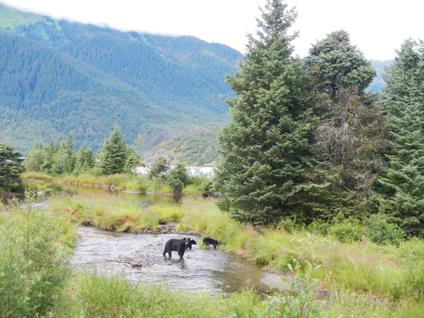 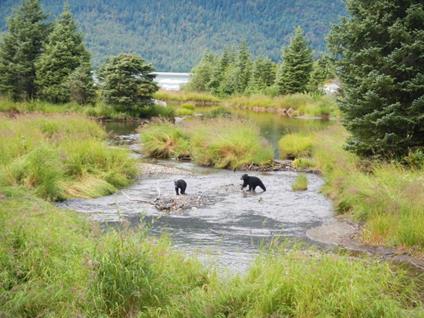 Below you can easily see the salmon in the water. 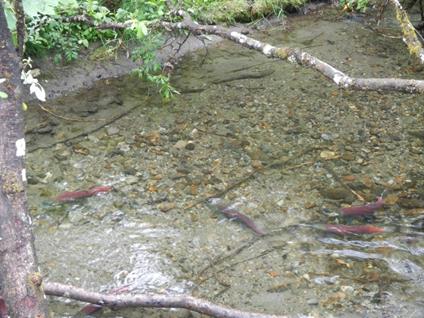 And then we found a porcupine, it was sitting in a tree. Somebody showed it to us, otherwise I would have missed it. I didn’t know that porcupines could climb trees. On our way back to the glacier we found a young porcupine munching grass on the side of the board walk. We could have a close look at one and could find out where its head and tail was :D. 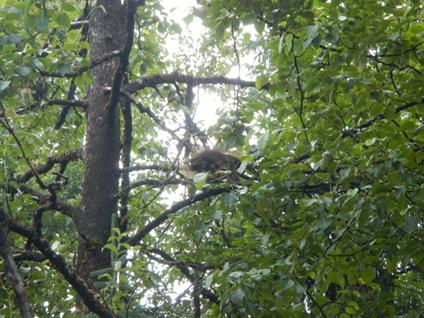 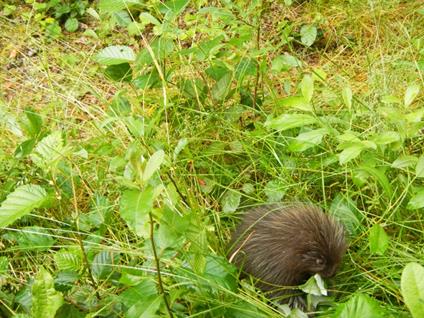 We decided to get a bit closer to the glacier. The size is always deceiving, so I zoomed into the water fall on the right hand side and you have the people as a reference. 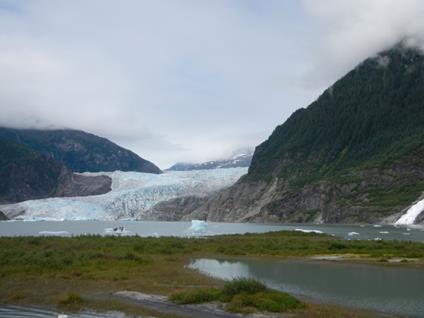 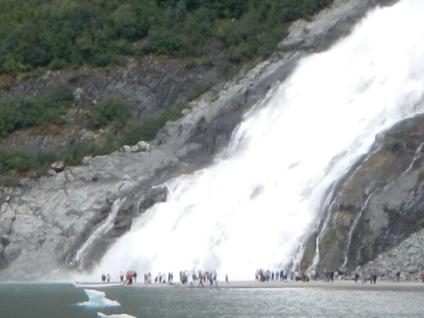 After walking along the park for a while, we decided to buy some food and nibbles for our three day ferry trip. Val and Wombat mentioned that the prices on the ferry were a bit steep. We went to a shopping centre. I liked the totem poles at the drive through pharmacy. 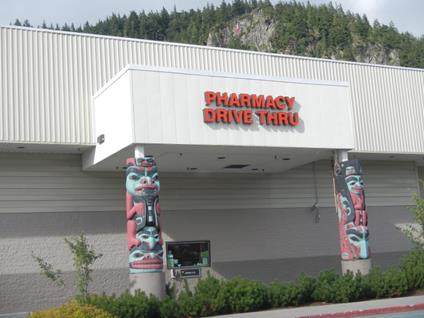 We bought what we needed and also got some credit for my mobile phone. The plan is to use it when we try to sell our bikes. Getting a connection with our supplier was not as easy, I had no reception in our room, but some on the road. So here am I standing, on the road to refill my phone account. Sigrid thought it looked funny. 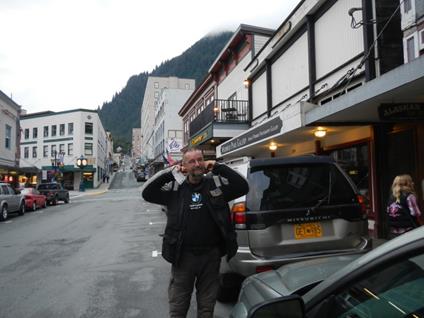 By the way, have a look at my outfit, BMW boots, jacket and T-Shirt, the only thing missing is the bike. Gaila actually infected me with that thought, she lent her F650 to me… Evil 😉 But I digress…
After I managed to refill my phone account without getting run over by a car, we went on a short sight seeing tour. All of the sudden I found proof that the Roswell incident was true – an Alien was staring at me from a shop …
but he didn’t say “Don’t run I’m your friend!”  (Joke from the film Mars attack and from our Network games). 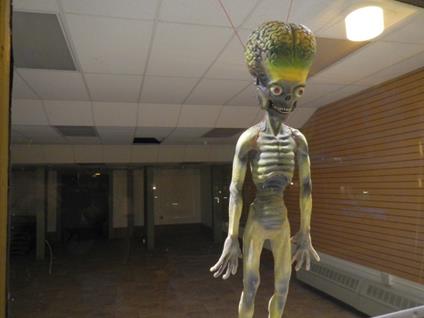 We were not sure why they put the alien there, it was an empty shop for rent, the only item in the shop was the figurine 🙂.
Finally we went back to the hotel, since we had to get up at 2AM to get to the ferry.